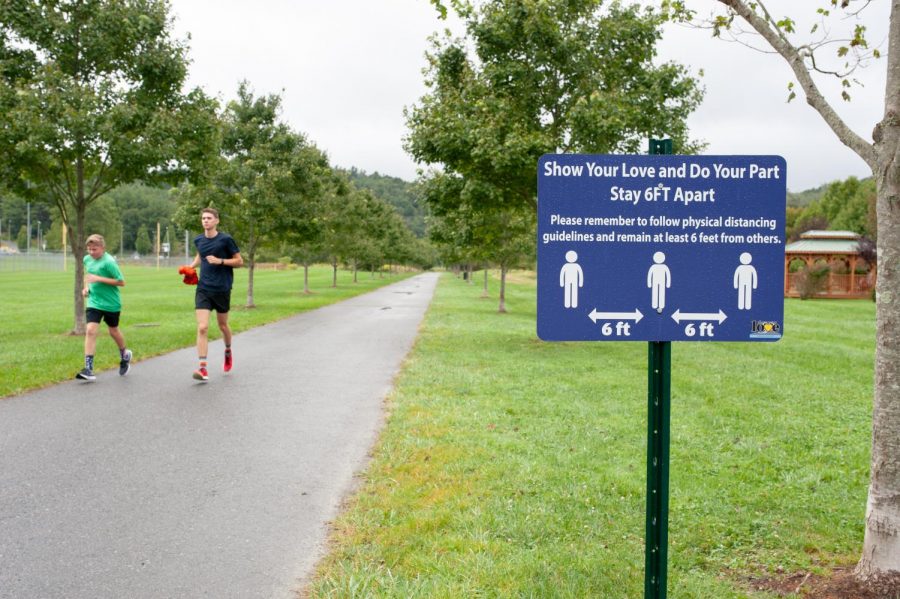 Physical distancing is encouraged for those using the Boone Greenway trail while exercising.

The sounds of birds chirping, dogs barking and shoes hitting pavement have become the new soundtrack to Boone’s fitness scene, replacing the closing and opening of gym doors.

After Gov. Roy Cooper closed gyms to prevent the spread of COVID-19, Boone residents were forced to look for other ways to stay active at home during quarantine. For many, this meant leaving the comfort of four walls and getting active outside.

According to Abby Fusca, a personal trainer for University Recreation, getting outside and trying new ways to stay active is a great way to de-stress.

“Especially right now with everything being so chaotic, and everything being super uncertain in some areas, it’s really important to have some certainty still,” Fusca said. “Being able to schedule in that workout and having some sense of schedule, it really helps.”

Like many others, quarantine forced Fusca out of the gym into the outdoors.

“Running, especially, has become a lot more common for me just because before the pandemic hit, I would do cardio in the form of swimming or I’d use the elliptical or the stationary bike,” Fusca said. “But now since the gyms are all closed and I don’t have that kind of equipment in my apartment, I’ve started running at the greenway or around campus.”

Emma Wright has also taken to exercising at Boone’s Greenway Trail in place of her normal gym routine.

“I think I did more stuff inside before, but then since coronavirus, I’ve been spending more time outside and going on walks and stuff, which I’ve really enjoyed,” said Wright, a sophomore.

Daniel Parker, who walks the greenway with his dog after work, said he doesn’t feel that gyms being closed has taken away from how he stays active.

“I used to go to the gym, but I’ve still been able to get out a lot and go biking and running and walking the dog,” Parker said. “So, it hasn’t changed too much, you know I kind of miss the gym, but I mean, I get plenty of workouts anyways.”

Others have turned to the internet to stay active while gyms are closed. Popular fitness Youtuber, Chloe Ting, gained almost 2 million subscribers between March and April with her virtual workout videos and fitness challenges.

University Recreation has followed a similar virtual format in an effort to continue providing students with fitness classes.

Limited fitness classes are being held on Sanford Mall, and weightlifting is available on the Student Recreation Center patio with a reservation.

Although some may have become discouraged from working out during quarantine, Fusca hopes that different kinds of exercise will help people jump back into physical activity.

“I would just encourage people to try out several different things like Youtube videos or online group fitness classes or swimming since the pool is open,” Fusca said. “Try new things to figure out what their kind of workout style is and what they want to do until the gyms are actually fully open again.”